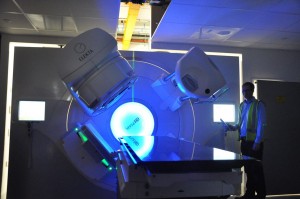 Cancer patients requiring radiation therapy will be able to receive treatment closer to home when Sunshine Coast University Hospital opens its doors next year.
Minister for Health and Ambulance Services Cameron Dick said SCUH would provide the region’s first publicly delivered radiation oncology service when it is scheduled to open in April 2017.
Mr Dick said the Adem Crosby Centre would provide comprehensive oncology, clinical haematology and radiation oncology services.
“Two Elekta Versa HD linear accelerators worth about $5.6 million in total will be used to deliver radiotherapy to patients with cancer, which is a major win for the Sunshine Coast community and locals needing radiation treatment,” he said.
“More than 650 patients are forecast to receive 13,000 treatments from the linear accelerators in the first year of operation – that’s hundreds of people able to get the treatment they need close to their homes and families for the first time.
“These linear accelerators will also improve the patient experience by delivering shorter, more efficient treatments.”
Mr Dick said the linear accelerators would enable clinicians to provide targeted treatment of tumours in the spine, breast and prostate.
“These services have never been offered in a public hospital in the Sunshine Coast Hospital and Health Service area, so this is a milestone not only for this new hospital but for this region,” he said.
“Our government is committed to providing patients with greater access to medical services, and these accelerators are just one example of how we are helping to deliver this at the Sunshine Coast.”
Fast facts:
* The linear accelerators are installed in specially designed ‘bunkers’ in Sunshine Coast University Hospital’s east building.
* One of the first sections of the hospital to be built, the bunker’s construction commenced in early 2014.
* About 2000 cubic metres of concrete and 180 tonnes of reinforcing steel were used to build the bunkers. The roof is 2.35m thick at its deepest point, while the thickest wall is 2.4m wide.
https://www.teamadem.com.au/wp-content/uploads/2016/06/delivered-radiation-oncology-servicefeature-img.jpg 720 1084 briazi https://www.teamadem.com.au/wp-content/uploads/2013/05/team-adem-star-logo1.png briazi2016-06-06 07:55:172016-06-06 08:20:15Sunshine Coast to receive first publicly delivered radiation oncology service